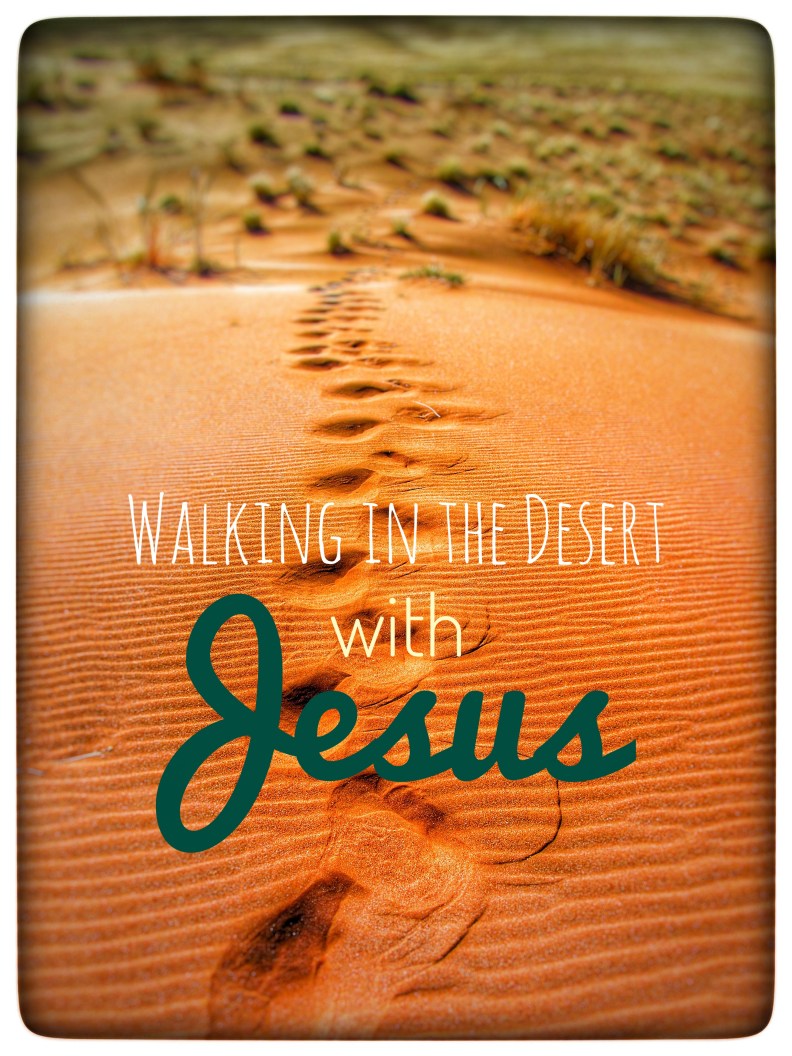 Our LORD, Jesus spent 40 days and 40 nights fasting in the desert. Something some might think He didn’t need to do. For instance, if I were to walk a mile in His sandals, and I knew I only had a few years to get my work done, I’m not sure I would have taken the time to go out into the desert alone. I would most likely have been trying to find all the right people to make things happen. I’d be out there putting up “Help Wanted” fliers, and searching out my Disciples–possibly eating as many chocolate cookies and cakes dipped in chocolate, and served with a side of chocolate, as I possibly could.

This of course, is just one of an unimaginable number of reasons why Jesus is Jesus, and I’m just a daughter trying to live my life in a way that would be worthy of His grace.

He went out into that desert because he was “led by the Spirit” (Matthew 4:1). It didn’t matter that He was on a time crunch, or that He already knew what His future held. He followed the Spirit, straight into 40 days and nights of hunger, only to be met on the other side by the slick serpent, Satan (now you try saying that ten times fast).

Reading about Jesus’ time spent in the desert, and how without fail He stood up to Satan and his promises of glory and power, has made me even more grateful to be a daughter living in the New Testament Times.

I’ve been doing some thinking on this, especially after Pastor R asked if anyone had been led to the desert, and what happened from it. At the time, I didn’t really have an answer. Especially since, I have never gone a week without food, never mind five weeks (and yes, I’ve got a tendency to be a little too literal. Something God is helping me with). I’ve realized though, that I do have an answer. Several, actually.

Being new to this walk, I don’t always see the proverbial forest for the trees. I don’t always see what is right in front of me. Not until much later, when, while doing what must be my 4,000th weighted elevator squat, the answer smacks me between the eyes.

Before my little family moved back to the PNW, we lived in a tiny little town in the high desert of Southern California. This place was often referred to as Satan’s Arm Pit. Not to be confused with Satan’s Butthole, Death Valley. This town was desolate, dirty, and lonely. The buildings were run down and the locals were mostly consumed by their need for Meth or whatever other drug they could put into their already ravaged bodies.

The four years we spent in that particular desert, were what I credit as my saving grace. They were my time of fasting. We had been placed there for a reason. I hadn’t heard the actual command to go there. I hadn’t even realized we were being led there. We went because that is where the Marine Corps sent us.

It was while we were there I realized something was missing from my life. There was a huge gaping abyss inside me that nothing seemed to be filling. I was thirsty, but I didn’t know for what. The day we found out we were heading back to the place I’d run from nine years ago (hello, liquid sunshine and evergreen trees), was the day a light went on inside my heart. That thing I was missing. That thing that would fill the black void inside me. It wasn’t a thing. It was a greatness, a joy, a forgiveness. It was God.

Obviously, I hadn’t been listening. God had sent my husband and I into a real desert, because I’m incredibly good a denial and God must have realized a figurative desert wasn’t going to be enough. I’d been blocking all His little nudges, all His taps on my shoulder. He needed me in that desert so that the blinders would fall off. It was that desert that led me to this path.

So yes, I’ve been in a desert. I walked that desert and came out the other side. I’m stronger for it, just like Jesus was.

We’ve all got our personal deserts to go through, just remember while you’re walking along those scorching dunes of sand, you’re not alone. You’ve been led there, and God would never leave you alone to navigate alone.